Its been awhile since I have posted but I have been up to a lot!  I haven't gotten as much hobby progress done as I'd like but hopefully soon I will be able to post some new pics of some projects I've been working on.  Hint: It's Necromunda!

So two weekends ago I played some Horus Heresy and last weekend I went to Adepticon.

I figured I'd just combine the two posts because I will not be doing a full battle report and also because I didn't take a ton of pics of Adepticon either.

I played a 3,000 point game against my friend Seti's Night Lords on a beautiful, sunny Saturday afternoon.

Take a look on his Blog; The Eye of Isha for more coverage of this game.

We played mission 1: Blood Feud.  This mission is basically Kill Points but in addition to that each player secretly selects a particular unit type from a list of unit types and then that player gets additional points based on how many of the chosen type is destroyed.


Here is the Deployment: 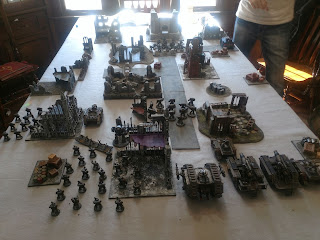 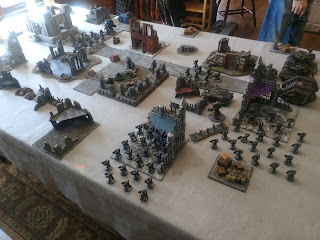 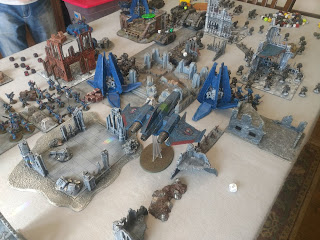 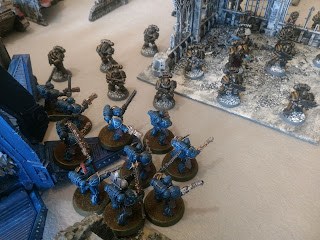 I am confident in my 20-man Tactical Squad holding(perhaps too confident). 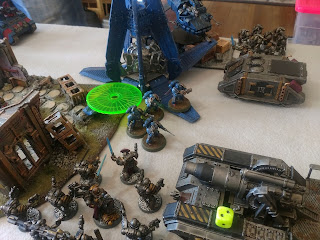 After his Land Speeder destroys a Medusa, my Destroyers deploy and toss a
Phosphex bomb onto the Terror Squad. 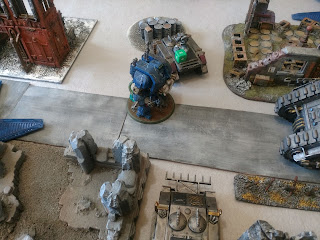 His Leviathan Dreadnought destroyed my Terminators in assault and then moved onto my Proteus. 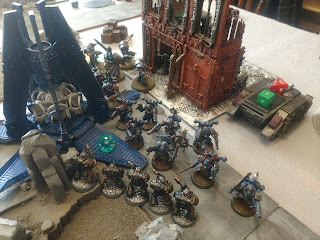 My Tactical Support Flamer squad flames the Night Lords and their retaliation is swift. 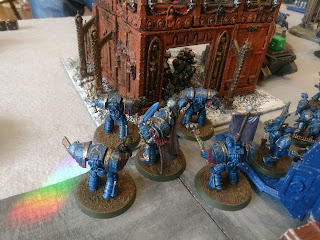 The Night Lords Terminators make quick work of one of my Tactical Squads. 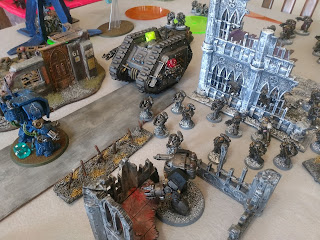 I tried to counter the Leviathan but it destroyed my Terminators and then my
Proteus before I could stop it. 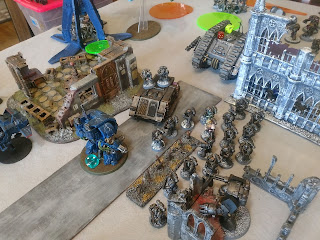 The Rhino moves to block the Leviathan Dreadnought. 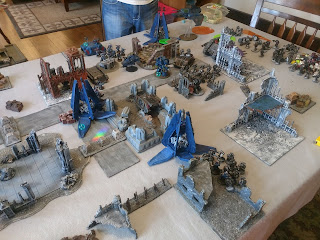 This was the final picture I took of the game.

Also the 20 man squads may need some more punch in HTH.  Adding ccw to the two large tactical squads could be very useful.

The Terminator squad was not as effective as I would have liked and I could have put those points into something like the Iron Havocs which may have been more effective, especially if they had missile launchers to deal with the flyer or lascannons to deal with the Leviathan.

I think playing 3000 points is a great size for Heresy games.  For veterans like us we were able to play a full 6 turns, which is the number the scenario called for in 4 hours and 15 minutes.  It was a good close game until the very end where the Night Lords pulled away and ended up winning handily.  He chose Vehicles and I chose Infantry for the secret unit type.

I have only finished a couple of 8th edition 40k games and maybe only a couple have felt as satisfying as this game.  Maybe I am just used to the old mechanics but the Horus Heresy rules just feel right.  It feels like I am playing a war game as opposed to a large, unwieldy skirmish game (which is what 8th ed 40k feels like).

And now onto my Adepticon coverage.

I only went on Saturday and arrived around 10:30am.  I have been to every Adepticon since it has moved to its current location and this is the first time I couldn't find a parking spot in the Hotel's parking lot.

We drove around for quite awhile until we found someone who was leaving so we could pull into their spot.

I heard that the attendance last year was around 4000.  I wonder if the attendance was up this year and if it will continue to rise because if so they may need to move again in the not too distant future.  I also heard that Adepticon is taking up all of the meeting rooms and ballrooms in the hotel which again would make me wonder if they will need to move at some point.

Anyways besides the parking, I had a great time and bought a bunch of stuff (as usual). 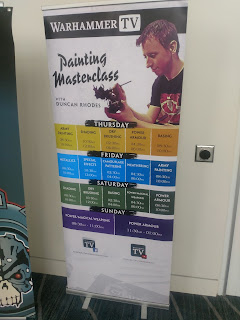 One of the first things I saw.  Duncan sure is busy this year! 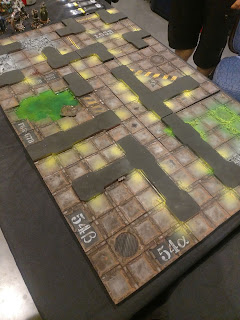 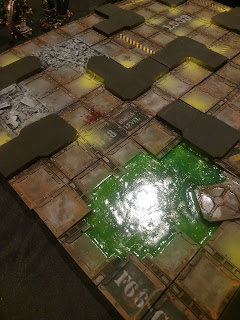 These were some really nice Necromunda 2D boards made in 3D. 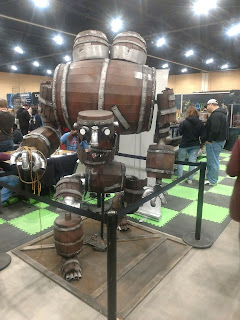 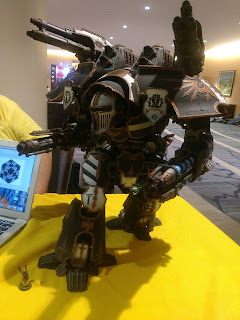 You don't get a good sense of scale until you see one of these in person. 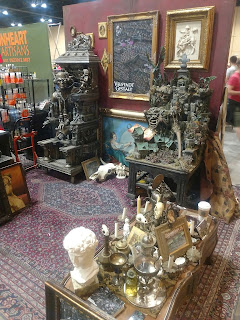 This booth was really cool.  They were showing off some display boards from the past. 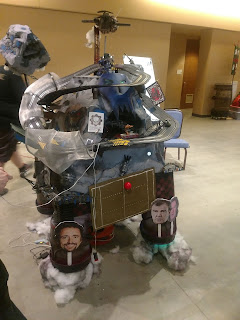 This display board was great!  It was an Ork Rok with slot cars racing around it. 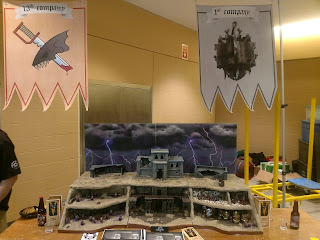 Another very cool display board. 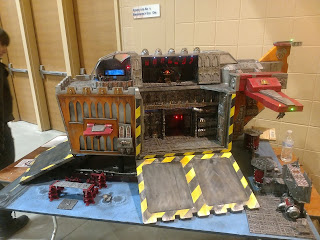 This ship display board was awesome! 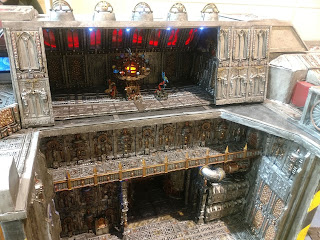 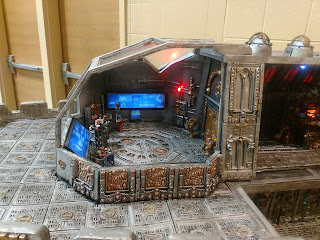 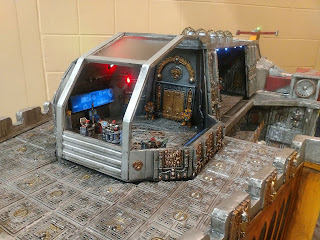 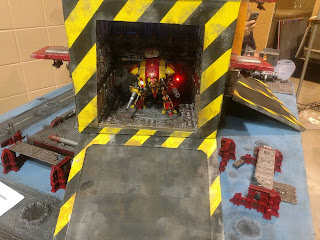 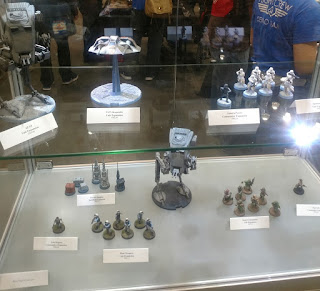 The game sounds interesting and I wouldn't mind trying it sometime. 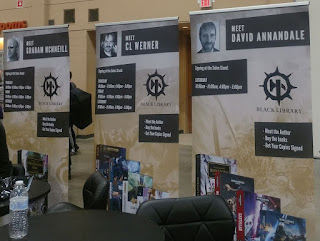 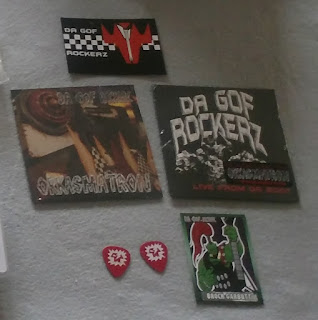 Da Gof Rockers are this band that dresses up like Orks and plays rock music.  I bought 2 of their CDs and got a free sticker and a couple of guitar picks. 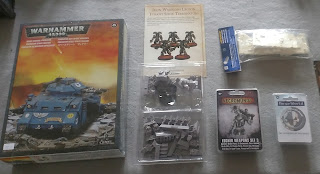 Here is the haul.

I hope that I can get some Hobby time in this week so my next post can have some freshly painted miniis!

Posted by Warsmith Morgoth at 12:51 PM No comments: