This is the third game in our on-going campaign.  This game takes place on Eidolon, a Daemon world in the Eye of Terror that is normally engulfed in war.  The four gods of Chaos continually fight over this world and there is rarely a lull in the battle.

For some unknown reason, there is a lull.

The Iron Warriors led by Lord Warsmith Boroth, have arrived at Eidolon to seek an ancient Eldar weapon which is buried deep underground.

This is where we pick up our story.  Landing on Eidolon, the Eldar and Iron Warriors have to first head to the access tunnels to the underground caverns.  This first game is the race to the access hatches.

NOTE: This game is meant to be a 'part 1' of sorts with the next game being the 'part 2', you cannot play just this one game or the second game without playing the other game because they won't work or make sense.

We played on a 6' x 4' board.  The deployment zones are L-shaped in the two opposite corners, 7" onto the board.  There are 3 objectives but only 2 per player: the one in the center and the one to the left of that player's deployment zone all the way in the corner.

The next game is 1,000 points with standard force org.  From the units removed from the board in this game the player may add those exact units onto his 1,000 point force, ignoring force org, up to 2,000 points total.  The removed unit will be intact and used in the next game as if it hadn't taken casualties from this game.

This is how we played this scenario, victory points were used no night fighting or anything else.  Fairly simple scenario but with a lot of tactical and strategic depth, or at least I like to think so.

Here is the initial deployment (The red circles indicate the objectives): 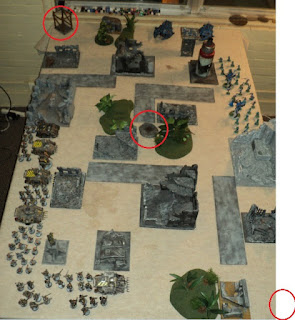 Here is the Eldar deployment, he took a lot of hand to hand units, which usually isn't his thing but make sense because of the next game, he will want to get them through into the underground. 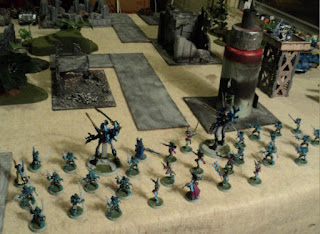 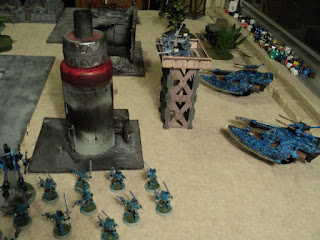 As you can see below he did take some long range fire, which would come in handy. 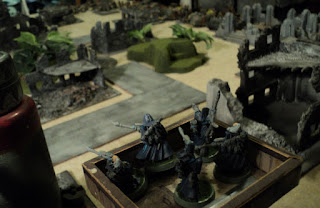 Here is part of the Iron Warriors deployment: 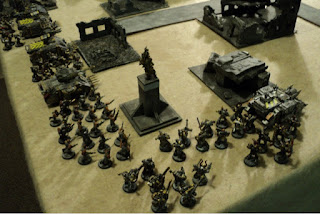 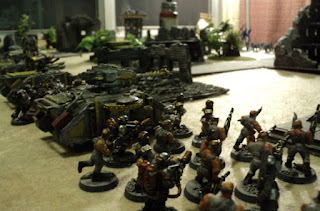 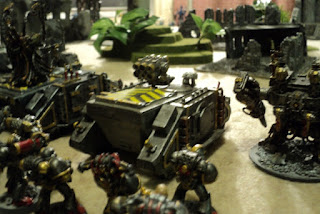 The Warpsmith moves off to the left in his rhino with his Chosen bodyguard.  The Eldar counter by moving a Wave Serpent loaded with Dire Avengers. 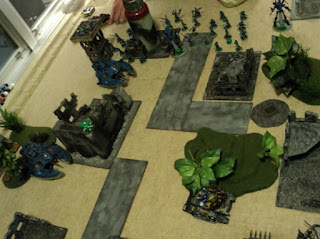 On the right flank the Iron Warriors' Vindicator moves forward and parks behind a building to dissuade the Eldar from attempting to move towards the corner objective.   The Eldar choose to move forward approaching the middle of the board. 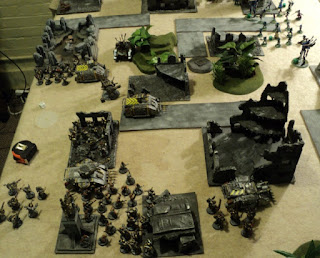 The Iron Warriors spot this move and attempt to counter by moving into the central building while the raptors turn and move closer to the central part of the board.  The Vindicator stays put, a good deterrant. 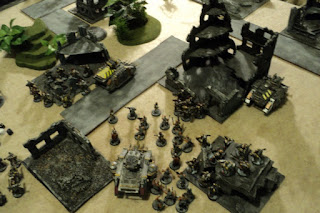 The Warpsmith and his chosen continue to push the issue and move again towards the objective with another rhino following them up.  The Dire Avengers disembark and the Wave Serpent makes short work of the Warpsmith's Rhino. 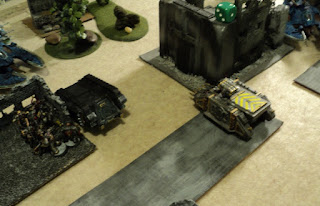 The Eldar continue their advance with a Wraithlord holding their left flank. 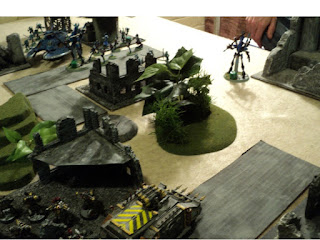 An Iron Warriors Marine squad is the first to enter the underground after disembarking from their Rhino. 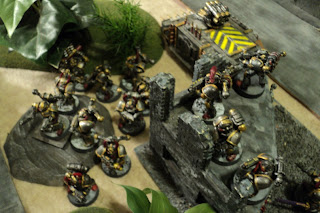 The Warpsmith is getting tired of the Eldar trying to disrupt their plan and fires the meltagun-attachment on his Mechatendrils, blowing the Wave Serpent sky high.  The other Rhino advances but there are some Striking Scorpions in the far building that will have something to say about their advance. 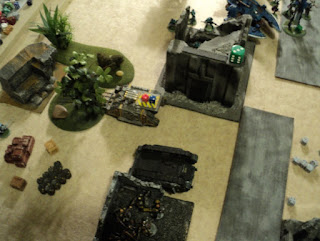 The rest of the Iron Warriors continue their central advance as do the Eldar. 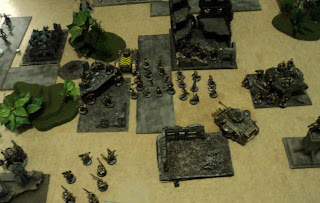 The Vindicator makes its move and turns the corner, levels its cannon and opens fire!  Its shell hits home but the Wraithlord's magical Eldar resilience holds up and he simply shrugs off the shot. 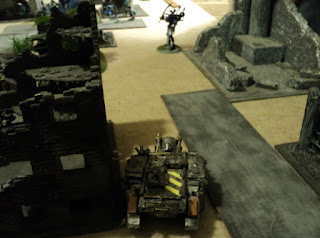 Meanwhile, a squad of Eldar Striking Scorpions make a dash for the tunnels and clamber down the ladder into the darkness beneath. 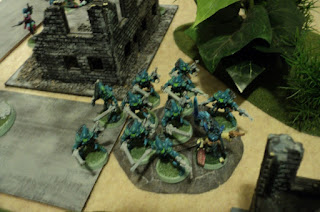 The Warpsmith;s squad is flayed to death by tiny shards of metal from the Dire Avenger's Shuriken catapults.  The Warpsmith's superior armor keeps him safe from the Eldar firepower. 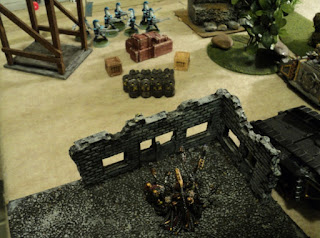 While the Warpsmith may not have been injured the fact that his squad is gone made him rethink his strategy of taking the far corner objective.  He decides discretion is the better part of valor and falls back to a position closer to the rest of his forces. 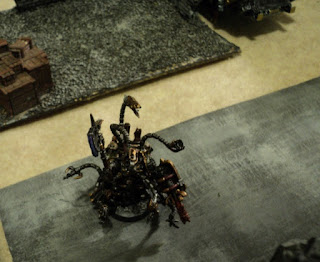 Not for the first time and certainly not for the last time the Waveserpent and the Helbrute exchange fire.  The Helbrute becomes immobilized. 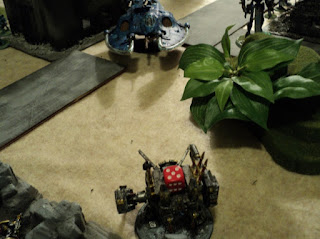 This is the end of the first part of our tale but soon part 2 will be posted right here.

Small Fortresses for the Big Game and Hobby Progress

Here are some pics of the 2 fortresses which I will bring to the Big Game.

I set them up and put some Iron Warriors on them to give them scale and some flavor.

Here is the First Fortress 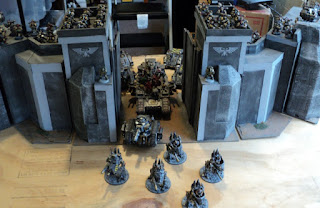 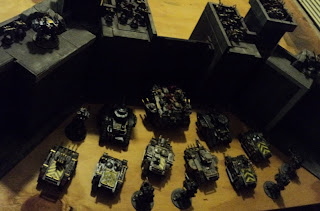 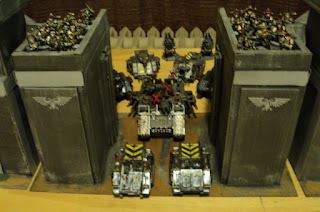 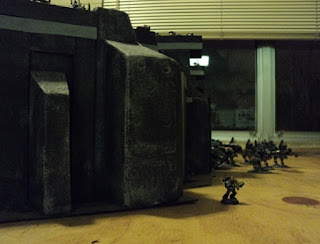 Here are some pics of some dudes and tanks I've just sprayed tonight: 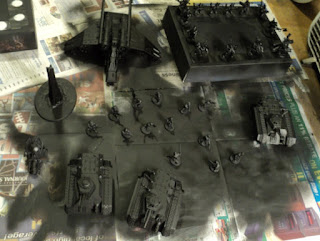 Khorne Berzerkers and Khorne Termies along with Lord Zhufor over to the right. 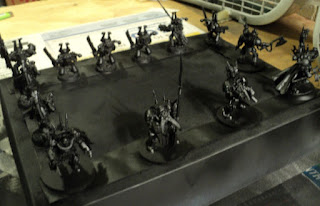 Some Cultists and chaos guardsmen. 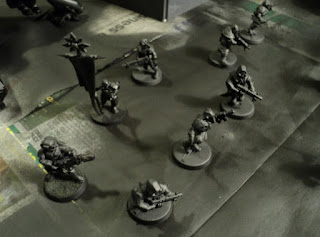 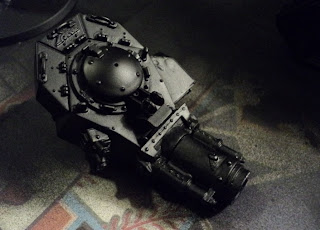 Thats it for now.  I am working on some other posts which will be up soon!

Happy 2013! Its been a while since I posted but don't worry I am still here and in 2013 I will continue to chronicle my gaming right here.

There are number of things to talk about, the first being my campaign game from Saturday.

This past Saturday night I played the 3rd game in our Eye Of Terror Iron Warrior VS Eldar campaign.  This is the first game played at my humble abode and the first game on Eidolon.  I will have a battle report up later this evening I hope.  I took lots of pictures.
Here you can check out the previous two battle reports on my friend's blog:
http://eyeofisha.blogspot.com/


I also talked to another friend of mine who is running my gaming group's annual big game this year.  We will be using my walls that I built for the big game I ran a few years ago.  I got excited thinking about it so I took some pictures.  They will be up here soon.
Here is my friend's blog talking about the big game this year:
http://excursionsbeyondthecall.blogspot.com/

Since the big game is right around the corner in March, I have been trying to kickstart my hobby juices again.  I need to start working on new figures as well as repair older broken figs.  I hope to show my work on here as I progress.


I still also intend to do a review of the Crusade of Fire campaign book and do another podcast update.

Look for another update on here later today....

Posted by Warsmith Morgoth at 8:26 AM No comments: