The Night Lords had captured the informant against the best effort by Captain Erasmus Golg of the Iron Warriors.

The informant was a lowly Sergeant in the Iron Warrior's Imperial Militia regiment that was assigned to Warsmith Martok's Grand Battalion.

While the Sergeant thought that he had been treated poorly by the Iron Warriors and wanted revenge, he couldn't have picked a worse Legion to defect to.  He was never seen again after the rendezous with the Night Lords' leadership.

Base 716 was an outpost on the edge of the Scarus Sector.  The Scarus sector is named after the Word Bearers 52nd Company Captain; Scarus.  It was named by Lorgar himself when Captain Scarus and his entire company was lost in the Warp during The Pilgrimage.

Base 716 has been used by Warsmith Martok as a listening post / weapon depot for the last 3 years.  It was gifted to him from Chaplain Erebus of the Word Bearers himself.  Why Erebus did this remains unknown.

After the debacle of Istvaan V by Martok's Grand Battalion, the Primarch Perturabo had refused to allow them reinforcements or replenishment of supplies.  Martok had faired poorly on Istvaan V, his Grand Battalion getting badly mauled by not only the Raven Guard but also elements of the Night Lords.  Martok had ordered his men to not only fire on the Raven Guard but also to continue to fire on the Night Lords when they closed for close-quarter fighting against the loyalists.

Martok made enemies of the Night Lords that day.  And since Perturabo has denied Martok's Grand Battalion resupply for the foreseeable future, he has had to turn to other sources.  Erebus had offered Base 716 and Martok accepted.


Defending Base 716 was a combined force of Iron Warriors and Imperial Militia.  Led by Force Commander Draxxen Loor and Praetor Holiton Grell.

The Night Lords attacked under cover of darkness...... 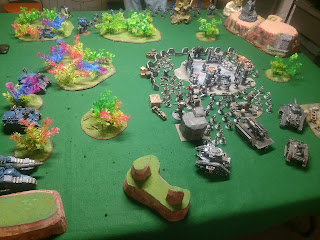 The Night Lords surround the base. 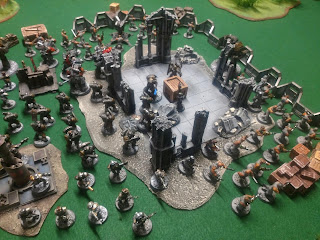 Surrounding a ruin is an Aegis Defence Line.  In the past this has been all that was needed for defense of this base. 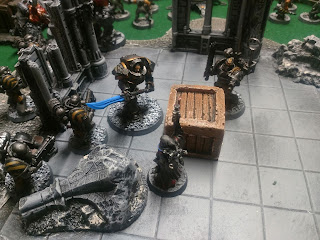 The Command Council discusses supply shipments and other logistical concerns unaware of the Night Lords' presence. 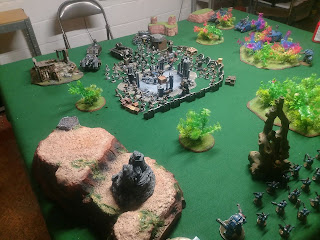 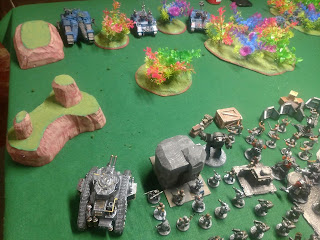 The Night Lords' armour lines up on a flank. 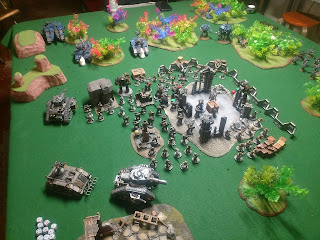 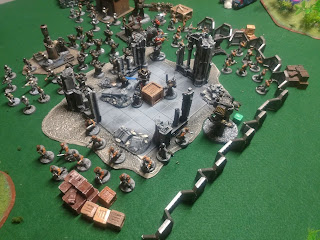 A large hole in the Militia's line appears and the Contemptor rushed to fill it. 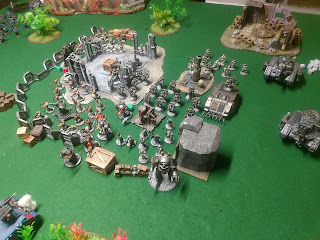 As the Night Lords get within charge distance the Iron Warrior's Contemptor moves to counter them. 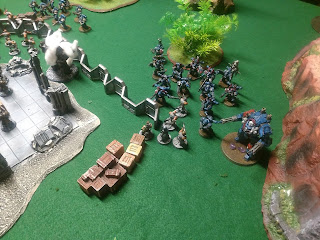 The Night Lords have very nearly taken the right flank. 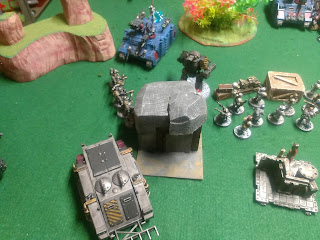 The left flank is being better defended, but it seems like only a matter of time before it collapses. 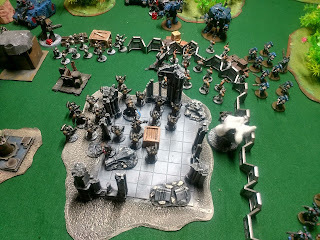 The large Iron Warrior marine squad joins with the Command staff to provide mutual support and a last defence of the base. 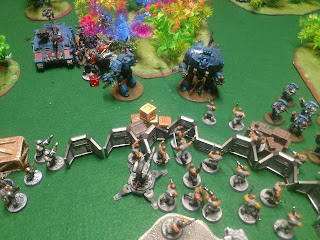 The Militia bravely, or possibly foolishly, charges into the Night Lords. 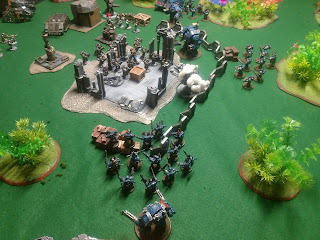 The Night Lords close in. 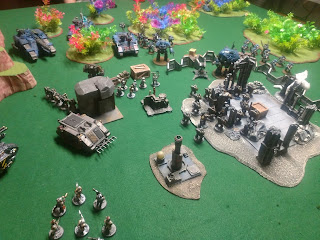 There aren't many Iron Warriors remaining. 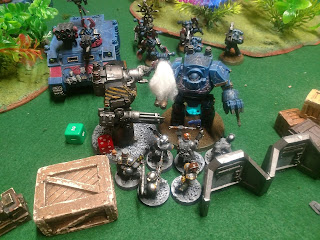 One of the last battles before the base is taken.

In the end the Night Lords were able to take control of Base 716 only to discover that there was more than meets the eye about the old run down base.

Behind the ruins almost hidden inside a large rocky outcropping, was a metal door which led to a staircase that went down.

The Night Lords had found the actual Base 716 and it was a vast sprawling underground tunnel system.

What awaits the Night Lords as they push into the tunnels?

For the Night Lords Perspective, check out the Eye of Isha blog post here:
http://eyeofisha.blogspot.com/2018/09/time-of-heresy-attack-on-base-716.html