So another RockCon has come and gone. This year if you've been keeping up with my blog, we had two big floor games. I was in charge of the Siege of Mordax game. I created a scenario packet to detail how this game would be run. I came up with the deployment rules, the wall rules, and the reserve rules. I have to say I'm very pleased with how the game ran. Everything went very smoothly. I had a blast and seemingly everyone playing in the game did also.

Thanks to everyone who participated in this game. We were able to start rolling dice at 12:30pm and we played 7 full turns. We called the game finished at around 9pmish.

It ended in an attackers' victory but just barely. It came down to the bottom of 7 and the defenders' warhound titan firing and just missing one shot which sealed the victory for the attackers. Great close game.

Without further ado, here are some pics. 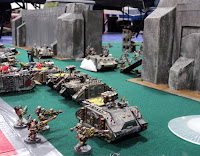 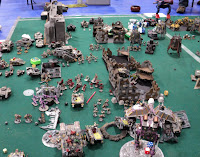 This game was a test game for the annual D-Company Big Game which is held every year in March.

I had some great feedback from the players involved and I am beginning to modify the rules for the big game.

It worked great and hopefully wih the tweaks it will be one of the best Big Games ever.
Posted by Warsmith Morgoth at 12:27 PM No comments:

I am building walls for the Siege of Mordax, a mega battle I am running at the forthcoming RockCon in Rockford, Il coming up October 23rd.

So far this is what I have accomplished for the walls.

First up this picture is the Styrofoam glued down to Plexiglass bases.

Next up is what I have completed as of last night.

I will keep updating my progress as RockCon gets closer!!
Posted by Warsmith Morgoth at 12:04 PM No comments: