The Attackers have pushed back the Imperial defenders into their capital city and they are holding on by a thread.  Will they hold out or will the Attackers crush them? 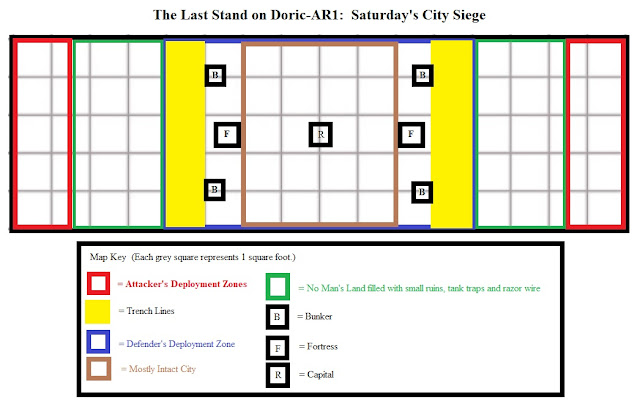 All armies on both sides must be Battle Forged. You cannot have an army of all Marneus Calgars.

The Attackers must deploy all of their units in either of the two red triangular 5' X 18" deployment zones.
NOTE: If the Attackers won the Void Shield Generator scenario on Friday than they may use the Tactical Reserves rules for deployment.

The Defenders must deploy all of their units in the central blue 5' by 8' deployment zone.
NOTE: If the Defenders won the Teleportarium scenario on Friday than they may use the Tactical Reserves rules for deployment.


The green rectangles between the Defender's and the Attacker's Deployment zones are areas filled with craters, tank traps, razor wire and small ruins.

The yellow strips are trenchworks.

The square with the R in it is the Capital building and central objective of the scenario.

The light brown 5' by 4' rectangle is the city center. This area contains mostly intact buildings which can be destroyed.

- Tank Traps and Razor Wire rules are used from the main rule book.

- The Defenders can not bring any Fortifications.

- Only units with legs and without the TITANIC Keyword can claim or contest objectives.

- Trenches confer +3 to saves and Ruins confer +2 to saves.


- Destructible Buildings in the City Center
In the light brown zone there will be a number of intact or mostly intact buildings.
Each "tall building" will consist of segments that can be destroyed. The Toughness of these sections are 9 and they have 30 wounds each.
Each building that is not one of the "tall buildings" will simply be Toughness 9 with 30 wounds.
Use the rules for Bunkers in the main rulebook for how these would operate.

There are 2 Ambulances which are Support Vehicles. Any IMPERIUM Infantry unit within 6" of the vehicle gets a 5+ save to ignore each lost wound.

There are 2 Recovery Vehicles which are Support Vehicles . Any IMPERIUM vehicle within 6" of the Recovery Vehicle not including TITANIC units repairs D3 wounds at the top of the controlling player's turn.


Unless they can Fly, Vehicles, Monsters and Bikes can only end their move on the ground floor of ruins.

Infantry are assumed to be able to scale walls and traverse through windows, doors and portals readily. These models can therefore move through the floors and walls of a ruin without further impediment unless the particular ruin has specific rules governing its accessibility.

If a model is obscured by 50% or more by ruins then the model receives the +2 to cover.

A model gains a height advantage whilst occupying the upper levels of a city ruin or building and shooting at a unit that is either at street level or within a lower level of city ruins. To gain a height advantage every model in the target unit must be on levels that are 3” or more below that of the firing model. If a model shoots with a height advantage, the target does not receive any of the benefits of cover.

You can move a model an extra 2” if it spends its entire Movement phase on a street or road (move a model and extra 4” if it advances.) This has no effect on units that can Fly.

Fire in the Hole

When a unit fires a Flamer and other flame-type weapons (usually weapons that auto-hit d6 times, are 8” range and are considered flame or chemical-type weapons in the background) at another unit in cover the unit being fired upon receives no benefit for being in cover.


2 CP - Sewer Rats: This stratagem is used just before you set up an Infantry unit during deployment. Instead of setting that unit up on the battlefield, they are infiltrating the city’s sewer system. At the end of any of your Movement phases, you can set up the unit anywhere on the battlefield at street level that is more than 9” from any enemy model and not in a city ruin. NOTE: This Strategem can only be used if your side is able to use Tactical reserves because you won the respective scenario from Friday.

1 CP – Booby Traps: This stratagem is used after both sides have deployed but before the first battle round begins. Secretly nominate a single city ruin to house the Booby traps and write this down – this cannot be a city ruin that is currently occupied by any models. The first time any model, moves into the city ruin, they trigger the Booby Traps and suffer D3 mortal wounds (D6 if they were advancing).  NOTE:  This Strategem can only be used by the Defenders.

1 CP – Death in the Streets: This stratagem can be used when a unit with a height advantage shoots an enemy unit that is entirely at street level and not in cover. You can re-roll all failed hit and wound rolls when resolving shots at that enemy unit.

The Capital Building is worth 5 Victory Points at the end of the game.

There will be one objective behind each Fortress worth 2 Victory Points at the end of the game.

There will be 4 objectives in the city each worth 1 Victory Point.

If the Attackers have more models in the trenches or closer to the Capital Building than they do in No Man's Land or their Deployment Zones at the end of the game then the Attackers get 2 victory points otherwise the Defenders get 2 Victory Points.

The game will end at 6pm, whatever turn you are on or whatever phase it is doesn't matter. Dice are down at 6pm and a winner is declared. Whichever side has the most Victory Points at 6pm is the winner.

Posted by Warsmith Morgoth at 6:20 PM No comments: